Note: how Astrology affects us individually depends on the placement of the planets in our birth chart. This forecast assumes an uncomplicated interaction between the transiting planets and a birth chart, which means parts of it may not apply to you (or may only apply to certain degrees). To learn about your specific chart, I encourage you to book a session with me. Also, this article was written for the Northern Hemisphere. 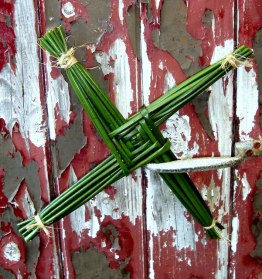 This Monday, February 4th at 1:04 p.m. PST, we’ll experience the annual New Moon in Aquarius. New Moons occur when the Moon and Sun are in the same position in the sky, which is called a conjunction (and why the Moon is darkened), meaning that both will be in the sign of Aquarius. This year, they will be at 15.45 degrees Aquarius, essentially the midpoint of the sign’s 30 degrees, offering peak Aquarian energy. There’s a Gaelic festival traditionally held around this time called Imbolc that marks the beginning of spring, halfway between the Winter Solstice and Spring Equinox. This festival is a holiday celebrated by many contemporary pagans and Wiccans. It’s a time of initiation, emerging from winter, and home cleansing. The next day, February 5th, is the Chinese New Year, initiating the new Year of the Pig.

Sun conjunct Moon means that there’s a fusion between our core identity and emotionality, our fundamental Yang and Yin. We can experience harmony between these two aspects of ourselves on New Moons, and have an easier time dialoguing between them. Dialogue may also be quite warranted here (with ourselves and others) as we have the benefit of these luminaries sitting in the insightful, innovative sign of Aquarius.

Aquarius is known for paradigm-shifting thinking, owning our uniqueness, and moments of genius. It questions conventions and doing something because “I said so.” At the same time, in its shadow presentation, Aquarius can be rebellious for the sake of rebellion, manifesting an orneriness and skin-deep use of the sign’s envelope-pushing potential. Aquarius offers us an opportunity, as we tune in to its energy, to question where we are in our lives – what we think, value, and believe – and push ourselves outside any boxes we find ourselves in. We can also gaze outward at the world and our circumstances and apply the same type of questioning there. Are there limits in place in our life that don’t need to be there? Are we stuck inside boxes we could break out of? What would in an inner revolution in our lives look like? Is one called for in an area, or broadly? It’s valuable to periodically ask ourselves these questions, and the Aquarian Sun and Moon conjunction can facilitate us doing so. 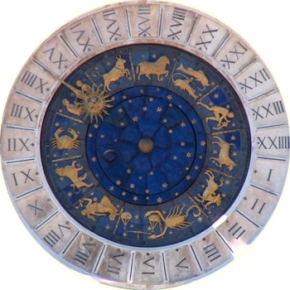 Additionally, Aquarius is a fixed air sign. Fixed means its energy is solid, focused, and steadfast. In Ceremonial Magic, it’s customary to work with the fixed permutations of the elements because of this: the energy of Aquarius, Taurus, Leo, and Scorpio can hold for a long time, strong and unyielding. In humans, the fixed nature of signs can lead to stubbornness, and that stubbornness is worth watching out for as we consider new ideas this Aquarius season. If we reflect on where we are in our lives, it’s important to do so with a spirit of openness. This isn’t a time to stay rigid, get defensive, or cling to the status quo, which may not be serving us. There’s also a huge difference between being open-minded and having progressive or original ideas, and many Aquarians fall into the trap of conflating the latter with the former. The point of this work is greater expansiveness, understanding, authenticity, and well-being in our lives, and it’s worth challenging the areas of our life that restrict that, even if we’re attached to them. There’s no sacred cow to Aquarius, which is part of why it can get into so much trouble, but only in tearing down the falsely sacred can we find the truly sacred, which is a task we may face this lunar cycle.

Otherwise, we’ve moved out of the difficult period many of us encountered in January, with the two eclipses and the Sun transiting between Saturn and Pluto, and into a relatively balmy one. Four planets are in the signs they rule (Mars in Aries, Jupiter in Sagittarius, Saturn in Capricorn, and Neptune in Pisces) and all planets are direct until Mercury goes retrograde in early March. The overall energy of this supports forward motion in our lives and in some cases, success with big projects or changes. The Sun and Moon conjunction also features a conjunction with Mercury and a sextile from this triple conjunction to Jupiter (in most cases, a sextile is a positive, supportive flow of energy between planets in signs that are harmonious yet fundamentally different from each other, like the Water signs and Earth signs), making this New Moon a potentially insightful and productive experience, perhaps breaking new internal philosophical ground or planning a bold adventure outside our comfort zone. There’s energy to explore, enthusiasm for it, and the benevolence of Jupiter is on our side, encouraging us and at times, providing luck. We may be extra adept with communication now, so if there’s something you’ve been wanting to say but struggling to figure out how, this is probably a good time.

Your Individual Chart Matters – Above All! 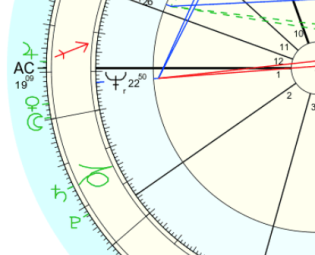 This image shows Jupiter and Venus (in green) conjuncting Neptune in this birth chart.

I say “probably” because how all of this planetary activity affects us depends upon how it interacts with our birth chart, as I mention in the italicized information above. Because the Astrology is relatively benign right now (in a general sense, not an individual one), I think this is a good time to dive deeper into what it means to have the planets influence us differently based on our charts.

Each planet in our chart is affected by the motion of the planets in the sky (this is what “transits” are). For example, as Mars moves through the sky, it forms relationships to the planets in our birth chart, which are called “aspects.” When Mars is in the same position a planet is in in our birth chart, we say that transiting Mars is conjunct that planet. For example, if my Venus is in Leo at 10.45 degrees, when Mars is in Leo at 10.45 degrees, it is conjunct my natal Venus. There are other relationships than these, which I encourage those of you interested in Astrology to explore. Specifically, trines, sextiles, oppositions, squares, and inconjuncts.

In terms of the Astrology we’re having now, Mars is in Aries, and for people with prominent Capricorn or Cancer who’re experiencing a square from Mars (a square is a 90 degree relationship that indicates, roughly, tension), this can be quite a difficult time. As a solar Cancer and a Lunar Libra (Mars in Aries is in opposition to Libra), I’ve noticed pronounced uptick in day-to-day frustrations. I also had an almost unprecedented experience of getting cussed out by a psychotherapy client over something small that I don’t see how I could’ve avoided. But so it can be with Mars, and this is why when it comes to Astrology, one person’s rough patch can be another’s honeymoon. Someone who has a Sun in Leo that Mars is trining (a trine is a harmonious relationship of 120 degrees that’s usually between planets in signs of the same element) may feel fired up, pun intended, by this transit, and able to make bold moves that may’ve seemed extremely difficult otherwise. What I write in these lunar blogs is more about the energy of the transits themselves in terms of how the planets in the sky relate with each other and what signs they’re in, and how these transits will likely affect people who have an uncomplicated interaction with them. For example, someone who has no prominent interactions in their birth chart with Mars in Aries will probably just feel increased energy, assertiveness, and follow through during this time, and possibly a shorter fuse and bigger bang with their temper, which are purer Mars in Aries qualities.

That said, Mars is square Pluto right now, which could bring up difficult emotions or experiences for many of us, things that trigger or surface our wounds or challenge any illusions we hold about ourselves. This may also appear more simply in a challenge to our confidence, abnormal surges of insecurity, or a nagging feeling that something’s off.

I drew a Tarot card for this New Moon and pulled the Six of Wands reversed. I was taught that this card remains celebratory whether it’s upright or reversed, but when it’s reversed, the celebration isn’t quite as substantial or significant. It can also mean some kind of delay in the fruits of the victory or good fortune or the presence of other obstacles, but obstacles that can and will be overcome. In terms of the Astrology, I interpret this card as acknowledging the period of increased peace and productivity we’re in following the eclipses and the Sun’s pass through Saturn and Pluto. It’s important to recognize what we’ve done so far this year, and it’s OK to take a beat and rest now, or focus on projects in a more comfortable-feeling way, knowing that other major activity and waves are coming shortly. Mars will conjunct Uranus soon, Mercury will go retrograde on March 5th, and Uranus will enter Taurus on March 6th, which could all stir the pot. 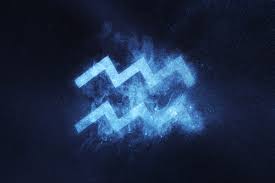 The symbol for Aquarius.

On the day of the New Moon, try meditating some on the energy of Aquarius. You can do this by relaxing and visualizing the symbol of Aquarius for a minute or two, allowing yourself to simply be with the experience of this process. Then, consider journaling on the following questions:

What “boxes” are there in your life? For example, in your relationships relationships, work, environment, family life, etc. Is there any paradigm-shifting that’s called for in any of these areas? Any new ideas that come to mind or limits or restrictions to challenge? Brainstorm about this if you feel like that’s helpful.

On the night of the New Moon, reread your answers to these questions. Then, draw a bath for yourself, light some candles, relax, tune into the symbol of Aquarius again, and think deeply about what you wrote. What do you feel about all of this? The New Moon can be a powerful time of beginning, as well as receiving information from our depths. Are there any intentions you want to launch as the annual cycle through the Zodiac nears its completion next month?