Note: how Astrology individually affects us depends on the placement of planets in our birth chart. This forecast assumes an uncomplicated interaction between the transiting planets and a birth chart, which means parts of it may not apply to you (or may only apply to certain degrees). To learn about your specific chart, I encourage you to book a session with me. Also, this forecast was written for the Northern Hemisphere. It covers 4/19/19-5/4/19.

On Friday, April 19th the second Full Moon in Libra of the year arrives at 4:12 a.m. PST, with the Sun exiting Aries and entering Taurus less than 24 hours later. The Full Moon occurs at 29 degrees of Libra, which is called a critical degree. Many astrologers take this to mean there can be a crisis, challenge with decision-making, or impulsivity occurring.

This Libra Full Moon brings completion to a process begun during the last one. It’ll likely highlight our relationships, which may feel good or bad, inviting us to see both sides of issues, connect with our artistic sensibilities, and prioritize connecting with others. Its opposition with the Sun in Aries can indicate that we’ve felt some tension in a relationship or within ourselves this past month between where we want to go and what will make others around us happy. Because this Full Moon occurs at 29 degrees, it’ll move into Scorpio within two hours of being exact. As the Moon enters Scorpio, a doorway opens into the deeper truths of our life. While Libra keeps up appearances, Scorpio tears them away. This is a potent evening for performing divination about our relationship cycles to gain profound insights and revelations about them, even if that’s uncomfortable. It may aid us in finding closure regarding relationships or relationship issues that have stuck with us. With all the other difficult and intense planetary activity detailed below, there can be an energy here of imbalance seeking balance.

Regardless of what the Full Moon brings, when the Sun enters Taurus, we can access a novel groundedness. Though this is checked a bit initially by a conjunction with Uranus that we’ll explore below, the Taurean Sun likes to settle down and take a slow, steady approach to things. Taurus savors the moment, luxuriates in life’s pleasures, and doesn’t budge until it feels ready (emotionally, mentally, physically, etc.), which can be a blessing and a curse. No sign’s more at home in its body, connected with the senses, and able to appreciate being alive on a fundamental level. That said, no sign is also as likely to get stuck in their perspective, despite heaps of evidence refuting it.

Taurus season is a powerful time to work on being comfortable in our bodies and with sensuality. It’s also potent for taking charge in a methodical, practical manner in our lives, including focusing on security and stability – in ourselves, our environments, and materially. Beltane, a traditional pagan fertility holiday, happens at the peak of Taurus season, when the earth is humming with desire and pleasure. This is an excellent season for prosperity magic.

The Sun Calls for Revolution

As the Sun nears Taurus, it unites with Uranus in Taurus, forming a conjunction, which means their energies fuse together. Uranus is a planet of revolution, eccentricity, individualism, innovation, and sudden, unexpected change. When paired with the Sun, the planet of our core sense of self, we get the potential for upheaval or revolution in how we see or experience ourselves. Uranus generally lets us know if we’re out of touch with our authenticity or not challenging ourselves enough. It can push us to think outside our boxes and it often rattles the cages in our life. This can come from thoughts and feelings we have independently and/or environmental factors.

This transit occurs annually for about two weeks. It’s often a time of self-assertion and clarification of how we feel about where we are in life that can catalyze positive, sometimes abrupt change. With the opposition from the Full Moon (the Full Moon occurs when the Sun and Moon are in opposite signs), we may initially feel tension between our desire for honoring ourselves more deeply and our yearning for the predictability of our status quo. If we aren’t open to growth, we may find ourselves feeling restless and dissatisfied, especially in light of a waning, uncomfortable square between the Sun and the Saturn/Pluto conjunction in Capricorn.

We Need to Talk About Retrogrades

In other big news this month, three planets are going retrograde: Jupiter (April 10th -August 11th), Pluto (April 24th – October 2nd), and Saturn (April 30th – September 18th). Because of Mercury Retrograde and the chaos it’s renowned for, many people are worries about these retrogrades, which is why it’s important to discuss retrogrades in general. Retrogrades are not created equal and retrograde doesn’t mean “bad.” When planets go retrograde, their energies pivot from outward to inward. This can be tremendously supportive if we respond accordingly.

In Astrology, size matters, but so does distance.

Regarding them not being created equal, there are two main issues here. The first is that the planets don’t equally impact us, which is generally a matter of two factors: size and distance from the Sun/speed (speed and distance from the Sun correlate). Planets that are closer to us have a more immediate effect on us than planets that are further away. Imagine if a tennis ball was orbiting you quickly from five feet away versus slowly from three hundred and you’ll get the idea. Mercury Retrograde moves anywhere from 9 to 16 degrees in a three week period. In contrast, Jupiter Retrograde moves about 10 degrees over four months. This is part of why it lacks the chaotic, frenetic feel of Mercury Retrograde. If some of you are wondering why the Sun is so prominent when it’s further away than planets like Mercury and Venus, that’s because its size makes up for the distance (and the Moon’s lack of size is made up for by its proximity to the earth). 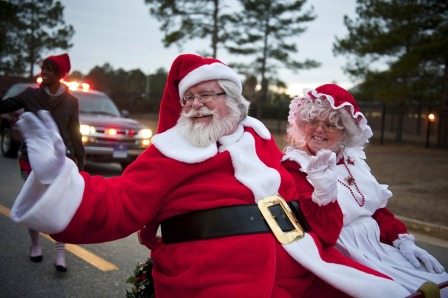 Jupiter is like Santa. While retrograding, it’s in the North Pole.

The other reason Jupiter Retrograde differs from Mercury Retrograde, which brings us to the second main issue, is that Mercury and Jupiter are fundamentally different planets. Mercury is curious, zippy, unpredictable, and the archetypal trickster. As the planet of communication and the intellect, there are lots of moving parts and wires to get crossed with Mercury Retrograde. Meanwhile, Jupiter, to quote Steven Forrest, is Good King Wenceslas. It bestows luck, expansion, benevolence, and wisdom, and when it’s turned inward, it’s still oriented that way, still optimistic. Saturn, on the other hand, is the taskmaster, disciplinarian, and “get real” voice in our head whether it’s direct or retrograde. The fundamental qualities of planets don’t change when they’re retrograde, what changes is how they’re oriented. Jupiter Retrograde can call us to reflect on our philosophy, values, charitable actions, and recent expansion, as well as embark upon an inner process of expansion. It doesn’t mean “bad luck,” though the apparent luck we normally have may be absent, like a wind that’s died down, which could appear a bit like bad luck. This is particularly true given the current Saturn/Pluto conjunction and its square to the Sun.

Jupiter also isn’t as apparent in daily life as Mercury is, and this is generally true as we move from the inner to the outer planets. Outer planets are more about life themes and trends. They assert themselves periodically to give us perspective or guide the greater flow of our life (like with the famous Saturn Return), aside from when we have prominent aspects with them natally or an inner planet lights them up during a transit (like with the Sun and Uranus now). For example, many Astrologers skim over the outer planets in birth chart readings aside from pointing to the generational trends they could embody, as placements may be shared with up to 30 years worth of people (30 years is the longest Pluto is in a sign). That said, if you have something like Moon conjunct Pluto, Pluto suddenly becomes a key player in your day-to-day life.

Otherwise, the inner planets are more prominent forces in our day-to-day lives. If life were a play, the inner planet activity would shape the individual scenes, with the moon driving the various emotions within that scene. The more distant social planets, Jupiter and Saturn, are like the overarching dynamics of the play’s individual acts. The themes of the play as a whole correspond with the outer planets. Social and outer planet transits are deeper and more fundamentally transformative than inner planet ones, but they’re also subtler and slower (aside from when inner planets light them up).

To put this differently, Jupiter has been retrograde four months a year throughout your life. It’s like a season, and most of us are used to it the way we’re used to seasons (and impacted similarly, like how winter calls us inward, etc.). Though Jupiter takes on different flavors based on the sign its wearing (and people with prominent planets that are aspected highly by it accordingly will have a more striking and eventful retrograde than those who don’t), this is business as usual. It’s part of the rhythm of life.

Regarding the other retrogrades starting this month, Saturn’s lasts about four-and-a-half months and spans seven degrees. This can be a time of assessing the structures in our life. We may recognize areas that need greater care, discipline, and restriction and feel more pessimistic about ourselves, so, as always, it’s a time to emphasize compassion.

Pluto Retrograde lasts over five months and covers just three degrees. A Pluto Retrograde can be a time of evaluating and assessing power structures, especially since Pluto’s in Capricorn. Pluto can also turn the gaze of truth inward, exposing our shadow and where we feel fake or inauthentic. It can aid us in working to surrender our attachment to what we can’t control, and there are powerful astrological boosts for journey work when retrograding Pluto is aspected by the Moon. But as I hope is clear, this isn’t going to knock us on our butts like Mercury or Mars Retrograde can unless it’s strongly activating our birth chart because Pluto is retrograde for almost half of every year!

The Mind, Art, and Wounded Healer 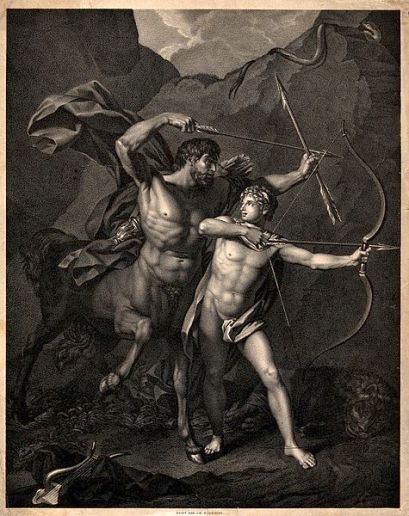 Chiron and Achilles by J.B. Regnault

On April 17, Mercury enters Aries and Venus follows on the 20th, with both conjuncting Chiron shortly thereafter. In Aries, Mercury is wild and free, though it can be reactive and quick to temper and jump to conclusions. That said, we can also get clear about our desires and what is and isn’t working for us individually. We may have surges of strong energy to stand up for ourselves and get to the point too.

Venus is in its detriment in Aries, given that the planet of love and beauty often looks toward the other (it rules Libra) and Aries is fundamentally self-oriented. Venus gains a strong ability to ask for what it wants when it’s in Aries though (which many of us could benefit from developing), and to draw healthier boundaries in relationships. This transit can help us identify what we want and express it.

That said, all of this is colored by the early conjunctions with Chiron, which surfaces wounds of personality and relationship, internally and/or externally, and may be a key part of the Full Moon. Healing through relationship may be part of this. Mercury is also going to square the Saturn/Pluto in Capricorn conjunction (with Venus following after), which provides a healthy check on some of the impulsiveness that can occur with Mercury in Aries. Otherwise, this is the last gasp of the Saturn/Pluto conjunction this year as Saturn Retrogrades away from Pluto. This transit will reach its climax next January, likely bringing a reckoning of purpose, integrity, and limitation on the international level.